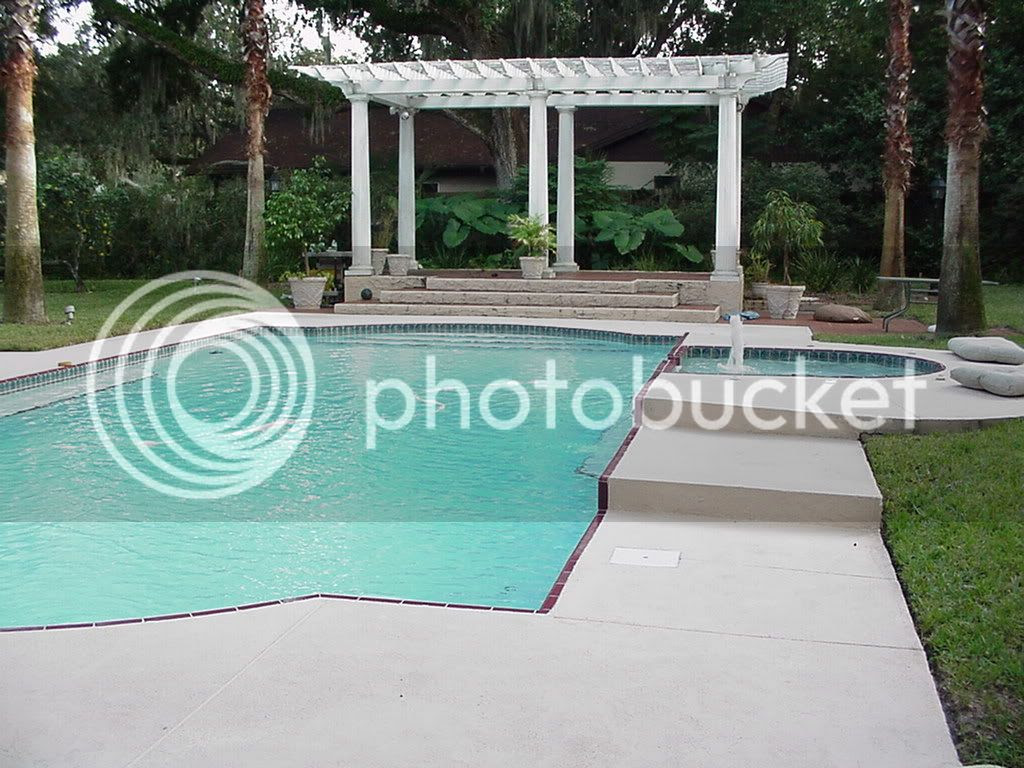 I decided I should update this article since I'm just starting to put this blog out into the public and some new readers may enjoy the "back story" to my apparent lunacy!
In 2002 my husband passed away at age 39, leaving me to run our business and our home on my own. To say I was devastated was putting it mildly. I lived pretty much in a fog for the next couple of years. The only moments of clarity I had were with my "pond". I put pond it quotes since it really didn't become a pond until 2004. At the start, it was a beautiful pool with heated spa and waterfall.
I know, it's really nice looking isn't it, for a resort that it. But it took constant cleaning, sweeping (it's under 5 huge live oaks!) and the adding of chemicals, mostly chlorine in very heavy 2+ gal. containers.
One day, after scooping poor dead frogs out of the nasty chemical filled water, I got the bright idea of turning my pool into a pond. I didn't swim in it, my son didn't swim in it, what was the point? The 24 hour filtration was costing a small fortune to run, the gas spa heater was hard to operate and the chemicals were of concern as they were mostly toxic.
Step one, just turn off everything and stop adding chemicals. I'll get into this whole thing in more detail later but for now as far as how it all got started, I decided to look at it as a five year experiment. So in September of 2002 I let it all go back to nature. And as of the summer of 2007, I had crystal clear water the entire year with little or no electrical filtration. 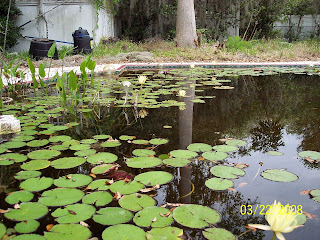 As you can see from this photo taken in March of 2008, it's quite a different feeling now. There were 16 lilies on the pond and it was still just March! This summer there have been more flowers, more wildlife visitors and just more glorious fun!

Right now, during the high heat of August, 2009, I have all electrical turned off except one small pump putting water from the pond into the bio spa. The spa is a bio filter with Papyrus, Pickerel weed and two forms of Arrow plant. The water is filtered by the roots and spills back into the pond, a little cleaner and with a bit more oxygen. The one thing I've learned is that standing water cannot have too much oxygen! This year I also had a part of the bottom detritus layer actually float up to the surface because of all the matted roots from the Bladderwort plant. For the first time I got to see the 5 inch thick bottom of the pond! It has now become a small island. I actually spotted a Heron standing on it once to catch fish! 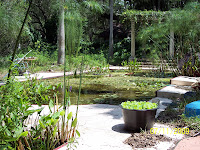 The pond more recently
The main thing I'm learning is that Nature is amazing. Everything naturally wants to be balanced. I wonder why we humans are so hell-bent on forcing it to change? This little lady seems to be asking us the same question! 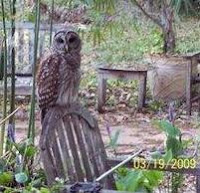 Click on Photo for video
of Barred Owl
Posted by HD Marsh AKA Marshlady at 11:28 AM No comments: