The Most Invasive Species on Earth

Today I read a wonderful blog by Meredith O'Reilly about invasive plants being aggressively sold in garden stores while volunteers break their backs digging them out! http://www.beautifulwildlifegarden.com/not-all-berries-are-created-equal.html

Here's the final paragraph:
"A side note: I met a woman once who told me that she wraps netting around her Yaupons and other native berrying plants in order to keep the birds from eating up the berries. She complained that the birds were eating the berries so fast that she couldn’t enjoy how pretty the berries looked in the fall. Personally, I find the sight of birds eating berries to be incredibly beautiful and entertaining – in fact, I garden for that purpose — but this woman was willing to cover her pretty shrubs with ugly netting in order to deny a native food to wildlife. I’m truly at a loss of words to explain that one."

I had one of my many OMG moments! How hateful of nature and the earth can humans get? We've all watched the videos of humans torturing animals in the name of feeding all of us, or killing the dolphins, poisoning all the pollinators, spilling the oil into animal breeding grounds so we all can drive our cars cheaply. The summer of 2010 wasn't pretty.  But when it extends to a one to one relationship like this, I find myself baffled.

""Invasive species" means an alien species whose introduction does or is likely to cause economic or environmental harm or harm to human health."

"An "invasive species" is defined as a species that is

1) non-native (or alien) to the ecosystem under consideration and
2) whose introduction causes or is likely to cause economic or environmental harm or harm to human health. (Executive Order 13112)."

Anyone else noticing a pattern here? Humans are and always have been very human-centric but this was a surprise to me. I have always thought of invasives as primarily bad for the native wildlife. As Ms. O'Reilly mentions in her blog, non-natives out compete natives and usually have less nutrition for the native wildlife, leaving the animals and insects without enough food and shelter.  But as far as the officials are concerned, it's about human health and harm. Here we really have circular logic, since it doesn't seem most of our officials have figured out that what's good for wildlife IS conducive to human health and welfare!

In the meantime humans continue to over populate the planet. Digging into eco-systems they shouldn't even be in, such as the latest Russian exploration into an under-ice lake in the South Pole.

We humans spread disease, pollute, dump garbage, kill and destroy everything including our own children and fellow beings. We slice off the mountain tops, flood valleys large enough to shake the earth, and even throw debris up into space! Then we're surprise that gentle nature seems to turn against us!

There is only one answer from nature's point of view, lower the number of humans. From my point of view, as a human, I'd like to see us use our brains to wake up and change our ways. We might make some progress in the United States, but I don't know what we can do about dense populations like China.

Photo Credit: Edward Burtynsky
Posted by HD Marsh AKA Marshlady at 9:15 AM No comments:

Nasal Irrigation has been a life saver for me. But as with all things medical, consult your own physician before trying anything that might affect your your health. Now a days most sinus specialists have at least heard of the Neti. Back when I started, I had to take the literature to them! I recommend printing out the University of Wisconsin study (link below) to take with you!

Many people are reaping the benefits of the Neti Pot, also known as nasal irrigation. I have been infection free for nearly 10 years and I attribute it to a combination of things, but mainly the Neti. 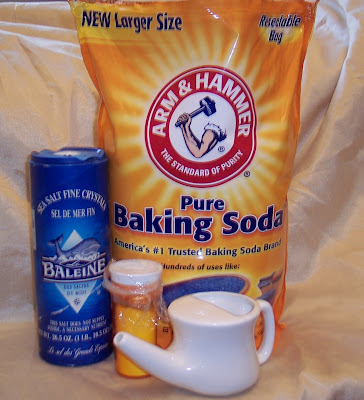 Basically it is moisturizing the sinus cavities using an isotonic solution. (Isotonic solution: A solution that has the same salt concentration as the normal cells of the body and the blood. As opposed to a hypertonic solution or a hypotonic solution. An isotonic beverage may be drunk to replace the fluid and minerals which the body uses during physical activity.) I create my own solution using Sea Salt and baking soda (NOT baking powder!)  The purpose of the baking soda is one of pH. Sort of like a buffering agent. I used salt only for years, and I find the addition of the baking soda seems to mellow out the solution. It has less of a "bite".  Basic recipes are a one to one ratio of salt to baking soda.  I actually mix the salt and baking soda in the ratio of two parts salt/1 part baking soda and keep this ready for use. The extra salt makes the solution hypertonic. ( hypertonic: 1 adj, pertaining to a solution that causes cells to shrink. 2 n, a solution that increases the degree of osmotic pressure on a semipermeable membrane.)

I mix my solution fresh each time. Take ½ to 1 teaspoon of the mixture and drop it into your neti pot. Put 8 ounces of filtered water into a microwave safe cup (I use a Pyrex 1-cup measuring cup) and microwave on high until it boils for at least one minute. I do this to get rid of as many of the by-products of chlorination as possible. Remember, this is going into you head!

Once the water is boiling take it out and pour it into your neti pot. Allow the mixture to cool down for several minutes. Most western medicine articles say use at “luke-warm” and most eastern or yoga articles say to use the mixture “as hot as you can stand it” being careful not to burn the delicate nasal membranes. This you will have to decide for yourself. I personally like it very warm, nearly hot.

When the neti pot is ready, put the spout into one nostril and tip your head slightly. The water will flow out the other nostril. Some say do this for 20 seconds on each side. I do one 8 oz. pot for each side. The next step is very important. Using breathing techniques, dry the sinuses of the extra water. Try bending at the waste with a clean paper towel and gently blowing out your nose to make a hissing sound. Breathing up through the sinuses as opposed to through the throat is what we’re aiming for.

Start this regimen daily about a week before you usually feel a sinus infection coming on. Do it at least ten days in a row. Most sinus sufferers are acutely aware of their sinuses. When I wake and feel that familiar pressure, I immediately neti and the pressure is gone. I’ve even seen bad sinus headaches disappear after performing the neti regimen.

Following are several links for your further study. If you suffer from chronic sinus issues it can change your life! Please let me know if you begin to or have practiced some form of nasal irrigation and how it works for you!

Posted by HD Marsh AKA Marshlady at 7:49 AM No comments: